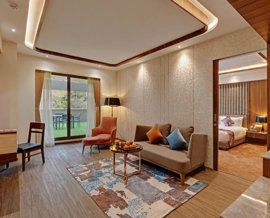 Find yourself in the lap of nature, tradition and luxury and heal your soul, mind and body in the holistic experience.Leo Resort is spreaded in 15000 Sq Mtr lush green land located in the lap of girnar hills (Junagadh). Junagadh is the headquarters of Junagadh district in the Indian state of Gujarat. The city is the 7th largest in Gujarat.The city is located at the foot of the Girnar hills. The city is in western India.Literally translated, Junagadh means "Old Fort". It is also known as"Sorath", the name of the earlier Princely State of Junagadh. After brief struggle between India and Pakistan Junagadh joined India on 9 November 1947. It was a part of Saurashtra state and later Bombay state. In 1960 after Maha Gujarat movement it became part of newly formed Gujarat state.

We are stay long time in junagdh the fern leo resorts in this amazing service with all' restaurant staff and special for mr Prabhat Kumar this very recommend and very cenciere person very helpfull and given excellent service thanku so much the fern hotel group.

A beautiful place to stay with good food and nice staff. The place is filled with all the facilities you can ask for. Rishabh Pandya made it even better for us with his smiling face and congenial personality. A must stay when in Junagadh. Very close to the Girnar hills/ropeway, it offers a lovely stay in the lap of nature. The pictures are from the room balcony. Loved it!